2014 is off to a mighty fine start for The Fine Line Project and friends, in particular Ralph, rock dog supreme. If you’re new to this blog, Ralph is a Jack Russell whose master Mike runs a popular Indie music blog and a weekly show on Radio Kaos Caribou, also a big supporter of ours. Ralph spent his Christmas and New Year leashed to Twitter, Facebook and an online crowdfunding project to raise money for a CD in aid of mental health charity Rethink Mental Illness. You can read more about that in our last blog, including a full track listing – 40 brilliant artists have donated their sounds to the project. 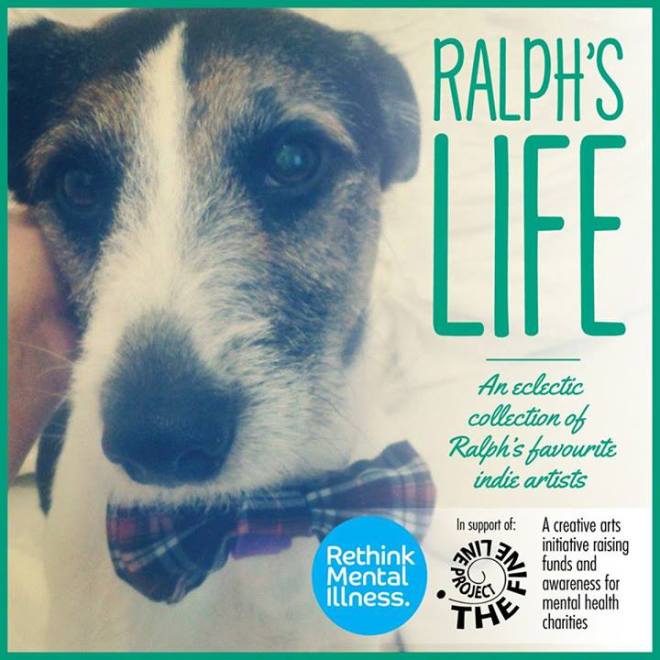 If you haven’t come across a crowdfunder before, it’s basically an all or nothing situation. Either you raise your cash in the allotted time or you don’t get a penny.  So things were a wee bit tense down at Ralph’s kennel on 2 January, as the 11th hour drew in and the money was still short. Thanks to an epic (this is definitely the right word) number of Tweets, including Christmas messages and personal appeals to every single one of some 5000 followers, and a rather sleepless night (we set alarms to follow the action from down South, at least we got some sleep), Mike managed to pull it off at the very last minute, topping his target of £5000 by an extra £120 on 3 January around 9 in the morning.

WOW! £5120 almost all thanks to the power of music and creative people who’ve supported this cause on Twitter, supplemented by a crowd of well wishers from further afield.

Some of that total will be wagging its way straight off to the charity – look  out for a swishy presentation cheque, currently being designed – while the rest will fund the CD and a launch gig in London, with ticket sales once again donated to Rethink.

*** We’ve always maintained that it’s not just about the money – awareness goes hand in hand with fundraising and we reckon generates much bigger and better things. The Ralph’s Life CD fundraiser has achieved way more than £5K+ in donations over the last few weeks. Forty fantastic artists have pledged their beautiful music and have lent their voices to a small campaign with a massive impact, hundreds and collectively thousands more have shown their support through Twitter, Facebook and via blogs and radio stations across the land and way beyond – lots of other countries joined in – with everyone united for one cause: talking about and raising money for mental health awareness and helping to counter the stigma which so often accompanies mental illness. ***

A lot of fun was also had along the way, especially in the build up to Christmas and New Year with extra music tracks donated, CDs, downloads, restaurant meals, artwork, T-shirts, cocktail recipes, special cassettes, knitted owls (we so wanted one!), poems, guitars, airtime, blog space, newspaper articles, interviews, RTs, MTs, SOs, future promises of support and so much more – it’s been an incredibly creative campaign all round.

One of our favourite things – listen to the RKC jingle:

Hats off to everyone who supported the cause and made such a big noise helping Ralph to achieve his goal with special thanks to RKC / Radio Kaos Caribou!

This is just the beginning of course…  Ralph’s master is now rather busy sorting the 240+ pledges from the crowdfunder, organising production of the 40 track CD and preparing for the London launch, a 14 band all day gig at Proud in Camden. We’re helping as much as we can. Whether you’ve been supporting this campaign all along or have just joined the ride, please help us too – let’s take this to the next level.

@fruitbatwalton (that’s Ralph) and @FineLineProject on Twitter, Ralph’s Mental Health Awareness Page on Facebook, The Fine Line Project on Facebook and please spread the word about the launch gig. Here’s the Facebook event page for that and here’s the crucial link:

The Proud Camden gig is due to feature 13 of the bands from the CD and one local guest band –that’s 14 bands, all for a mere £10 and with all proceeds to Rethink:

If you can’t make it to the gig, please keep an eye out for the CD – we’ll need your help to sell all the copies and raise even more money for Rethink.

Once again folks, THANK YOU!