We’ve had some amazing donations in since the Southampton Cellar gig and third time lucky (with a lot of hard work in between!) we’ve managed to raise another grand total of £1000 for charity. This one’s for Rethink Mental Illness whose front line services and ceaseless campaigning benefit those with mental health issues and their families and carers all over the UK.

We have a lot of people to thank! 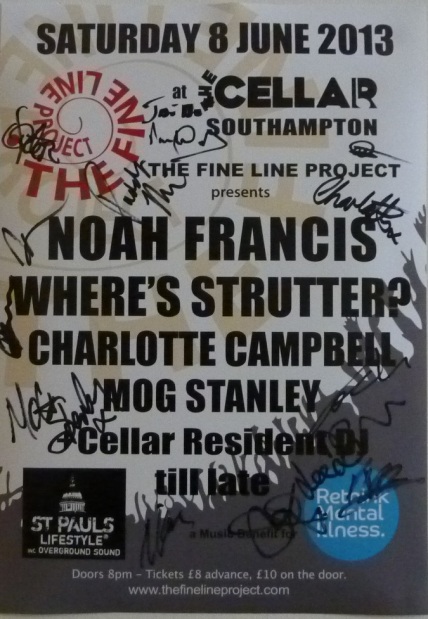 First up our fantastic line up of artists who together created an evening of entertainment which will go down in history, as anyone who was there will confirm.

Soul star and outstanding singer, performer and songwriter Noah Francis showcased his new album in the headline slot with an amazingly talented band, Pandit Dinesh, John Robertson, Paddy Milner, Peter Hope-Evans and Nihan Redford; Where’s Strutter?‘s Patrick Neville, Lee Broadbent, Dan Green and Josh Leach were utterly awesome and delivered powerful songs and the kind of blistering set which is bound to hurtle them into the biggest musical arenas before long; local singer songwriter Charlotte Campbell charmed everyone with her crystal voice, intelligent songs and engaging manner; and in the opening slot Mog Stanley warmed up the show with his unique blend of blues powered by dynamic guitar playing and one-man band percussion.

Next up big thanks to our fantastic venue The Cellar in Southampton and their team including manager Joe who also DJ’d later on, soundman Pete, Glynn on lights and a great security guy, whose name is to follow.

Huge thanks to Rethink’s Fiona Magor for taking the trip with us down South and Maria in the press office for sterling support.

We were incredibly lucky to have the services of local Prince’s Trust supported photographer Steve Maynard on the night and will be publishing more of his pictures over the coming days.

Thanks to our own always brilliant team of volunteers and faithful supporters including Patrick, Craig, Grace, James and Sue as well as Liam, Angelica, Alex, Stephanie, Sarah and Adam behind the scenes and long term supporters Gerry, Darren and Joe not forgetting the Armadillo Central team.

Special thanks to the equally brilliant team at St Pauls Lifestyle who worked alongside us on the build up as well as on the day and continue to support The Fine Line Project on their site, where we now have LISTED ARTIST status: Rose, Dominique, Angus, Ben, Jessie, Georgia and Jacques. Check their site for special sessions filmed and recorded just before the gig featuring 3 tracks by Noah Francis and his band and also Mog Stanley. To follow, further recordings with Where’s Strutter? and Charlotte Campbell, all in the name of The Fine Line Project and supporting further awareness for mental health charities.

More thanks to Noah Francis’ team including Poorang, Spider and Paddy and Noah himself for generously donating to the funds raised as well as performing for us.

We’re also incredibly grateful for the support of online music blog Ralph’s Life, local press The Daily Echo and Hampshire Chronicle/7 Days, Solent Mind and The Studio Romsey in particular for amazing last minute help with flyer printing. Many local businesses and organisations, too numerous to mention also helped with publicity, Twitter support, poster display and flyers – we hope to get to know you better on the next one. Southampton is one big friendly city and the sun shone all day! We hope to be back before long…

Check back soon for more photos and some reviews and thank you for your support!

What a night! So much talent, such great sounds!

Sorting through the pictures and working on a review and thanks list. 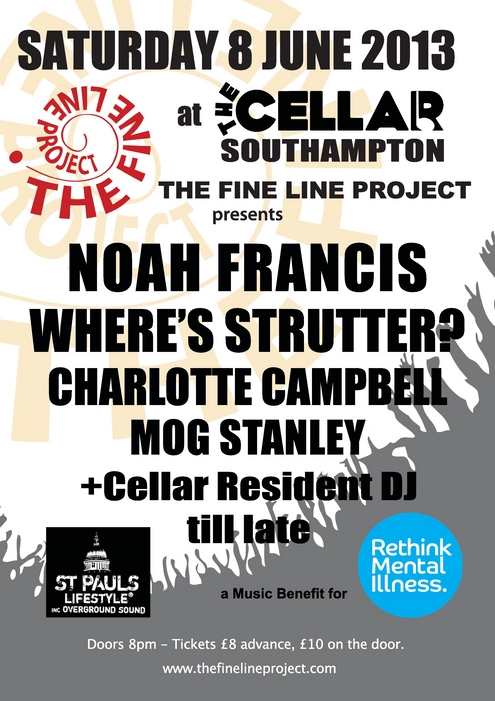 BUY TICKETS FROM THE CELLAR SITE OR £10 ON THE DOOR.

Following a couple of sell out gigs at The Troubadour Club in London, The Fine Line Project are heading South with their music for mental health project and have organised a gig at The Cellar in Southampton in association with cult music site St Paul’s Lifestyle.

Tickets are selling at £8 in advance and £10 on the door. All proceeds from ticket sales and donations will go to Rethink Mental Illness.

The Fine Line Project is a creative arts initiative supporting awareness and fundraising for mental health charities. The project focuses on great artists and great sounds, all for a great cause. Mental illness affects an astounding one in four with many affected more seriously by the stigma linked to being diagnosed than the actual condition.

Rethink directly supports almost 60,000 people every year across England to get through crises, to live independently and to realise they are not alone. The charity’s website and helplines give information and advice to 500,000 more and changes policy and attitudes for millions. Rethink’s services, support groups, and members cover every county in England, giving them local insight and helping to spread innovations nationally. All their work is governed by people who have lived through mental illness.

Here’s the line up in its full glory – another great flyer from Patrick – and a supremely brilliant gig, coming up soon! How can you resist? Get buying tickets now. They’re only £8 up front and every penny is going to a great cause: Rethink Mental Illness.

Thanks for spreading the word!

With thanks to The Cellar Southampton and St Paul’s Lifestyle for their support. Here’s the TICKET LINK – ADVANCE TICKETS

We’re unbelievably excited about our next headline act, the incredibly talented Noah Francis.

We first saw Noah perform last year and were totally blown away by his voice, his songs, his band and his sheer presence on stage. Here’s an artist who certainly knows how to capture and hold his audience’s attention from the subtlest melodic tone to the sheer power of the chorus, all tightly controlled yet delivered with utter ease – electricity unleashed. More about this great singer, his band and new album later.

Meantime a word about our hosts, the fabulous Cellar in central Southampton – we’re looking forward to heading South on June 8th to work with this legendary music venue and their great team. We’ll be promoting the gig, which is in aid of Rethink, in collaboration with another brilliant Southern outfit, St Pauls Lifestyle, the cult music site known for their unstinted support of indie music everywhere. These people have soul! We’re also looking forward to some online support from the one and only Ralph, rock dog par excellence.

We did say heading South in June – here’s a suitably sunny shot of Noah and Jamboree, one of his acoustic tracks. Back soon with more news.